As the debate about the city’s possible purchase of the Arbutus corridor is ongoing, I realized there might be little time left to walk or bike along the trail, a trip that was on my Vancouver ‘to do’ list for a few years.

Though we still haven’t managed the bike trip, my family and I went for a nice walk along three routes of the corridor a few weeks ago. Some parts of the walk are probably less familiar to the general audience than the popular route along 6th Avenue between Fir and Maple streets. In the following photo essay, you’ll find some impressions of the trip. Please note the trip was taken spontaneously and most photos taken by my iPhone. END_OF_DOCUMENT_TOKEN_TO_BE_REPLACED

Three weeks and no charges have been laid in the case of Julie Paskall, the hockey mom who was beaten to death at a community centre in Surrey. The soon five-year-old murder of Wendy Ladner-Beaudry in Pacific Spirit Park as well as the mysterious sexual assault series at the UBC campus are equally unsolved.

Not a good idea: focussing on your smart phone in a back alley. Photo: Katja De Bock

Even though crimes nationwide are generally decreasing, sexual assaults and other violence against women tend to stay steady. END_OF_DOCUMENT_TOKEN_TO_BE_REPLACED

Are you over 55 and looking for a great workout? The False Creek Grandragons dragon boat team trains twice weekly between February and November and takes part in half a dozen competitions each season. Read all about it in my blog post for the Kerrisdale Playbook (kccplaybook.org).

Ann Goldberg, a photo-realist painter from Edmonton who now lives on the University Endowment Lands, is exhibiting her work at Winsor Gallery. The show Eden premiered on June 13 and will be open until July 13.

I was lucky to meet Goldberg and interview her for Kerrisdale Playbook, a blog for the Kerrisdale community curated by Keiko Honda. 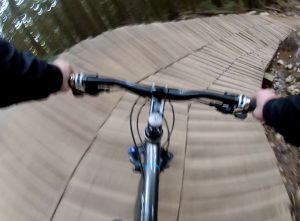 Andrew Budreski had a good time with his new Kona Tanuki DL mountain bike, until it was stolen on May 29.

***in the light of the Kayla Smith story, who met up with her bike thief after seeing her bicycle listed on Craigslist and then used the opportunity to “steal” her bike back, I thought it would be interesting for you to review my story about the KOM CPC bike registry, which was first published on May 31***

Bike to work week did not quite turn out as Andrew Budreski had expected. When the 29-year-old project manager returned from a meetup with friends last Wednesday night, he was in for a nasty surprise. His brand new mountain bike was stolen from his car, which was parked at West 7th Ave. and Pine St.  END_OF_DOCUMENT_TOKEN_TO_BE_REPLACED

With the final count concluded this afternoon, the results for Vancouver-Quilchena in the BC provincial elections 2013 are as follows:

*** updated with Elections BC reply***

As the BC provincial elections are only a day away, one of Quilchena’s candidates will go to bed tonight with a form of not-so-mild chagrin.

Dear readers, I am currently traveling in Europe, but I received an email in my inbox I wanted to share with you. I already mentioned in my profile of BC Conservative candidate Bill Clarke that he and his team were planning legal actions against Elections BC, as a clerical error resulted in Clarke’s name to appear on the ballot.

It looks like their fight was tilting at windmills. Don Main, communications manager of Elections BC, confirmed:
“The BC Conservative party did not include Bill Clarke’s name on the List of Candidate Endorsements submitted to Elections BC by the close of nominations.  His name will be on the ballot with no party affiliation.”

Below is a reproduction of the letter by Rick Peterson, campaign manager, about his view on the situation.

Meanwhile, I wish all Quilchena residents and candidates a fair and well-attended election day.