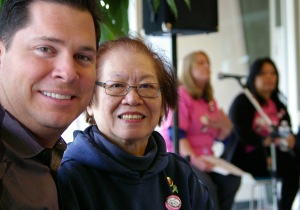 KOM’s main work lies with crime prevention and outreach, said Bulic, who also works as a security man for the Vancouver Canucks. People come to the KOM centre with questions how to protect themselves from break ins in homes and cars.

Hooper was a panellist at Langara College’s anti-bullying fair. The panel discussed how to stand up against being bullied and encouraged students not to be bystanders. 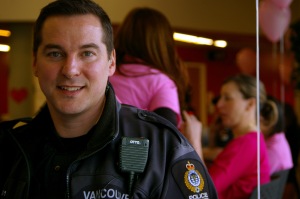 Don’t demonstrate emotion when you’re the victim of bullying. Stand up and say no to the bully, when you see it happening, were some of the central messages.

Meanwhile, Premier Christy Clark shook hands with Point Grey secondary school students during their Pink Shirt Day event in Kerrisdale. The premier encouraged students to “step in, show courage and not be a bystander.”

Jeremy Sally tweeted this photo of the event: