How often do you have the opportunity to meet a superstar? And would you even recognize her?

This happened to me last week, as I was interning at GlobalBC. I was asked to accompany Global Mandarin reporter Frank Qi to a press conference. We were going to meet Vancouver’s new tourism ambassador to China, a Vancouver-based Chinese singer superstar named Wanting Qu. Both Qi and I had never heard of her before. 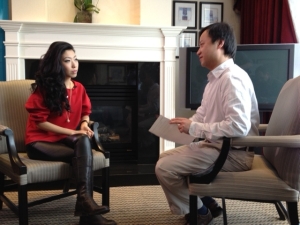 As interns often have to come up with their own assignments, I decided to live tweet from the event. I expected a packed crowd of fans surrounding the building, but I was surprised to see only  one Global TV car standing in front of the Granville Island hotel.

As it turned out, our team was one of few selected media invited to meet the singer. We asked Stephen Pearce, Tourism Vancouver spokesman, what is the City’s plan with Qu.

Pearce admitted he wasn’t aware of Qu’s huge success until he heard about her last November. Wanting Qu, 29, who was born in Harbin, China, had been living in Vancouver since the age of 16. Although her parents sent her here to study something serious, Qu’s heart was committed to music and she was persistent in fulfilling her dream. Qu, who sings in both English and Mandarin, took home the Best Album of the Year award at the 2012 Beijing Billboard Music Newcomers Festival. She also performed on the CCTV New Year Gala, the most watched television program in the world with over 700 million viewers.

Qu has hundreds of thousands of followers on Weibo, the Chinese microblogging site. She still has some catching up to do in North America, though. The Twitter handle @wantingqu “only” has 2,744 followers.

China is, next to India and Brazil, one of the upcoming visitor markets for tourism in our region, said Pearce, who added the financial cooperation is modest, compared to the immense publicity potential Qu could provide making mainland Chinese aware of Vancouver.

“Wanting Qu will allow us to break through the clutter, will introduce Vancouver to a new Chinese audience,” said Pearce, who expects the number of Chinese tourists to rise by 16 per cent in 2013.

Qu will star in a series of videos that feature Vancouver and its surroundings through her eyes.

Qu said she loves Vancouver, because it accepts diversity and is very quiet and peaceful, compared to China. She said she has more difficulties concentrating on songwriting in the loud surroundings of Chinese cities than in quiet Vancouver. Surprisingly, she said she loved Canadian food. Chinese-Canadian cuisine, however, is not one of her favourites. “It’s good, but it tastes completely different than in China,” she said.

I wondered if Wanting Qu is actually known to the Canadian audience, so I decided to conduct an informal survey on a Sunday afternoon stroll on Dunbar Street at 29th Ave. The first person  whom I showed the CD was a direct hit. Dunbar teenager Sofia Shen recognized the singer and told me she listens to Qu’s music. She was aware Qu lives in Vancouver, but didn’t know anything about Qu’s newly ambassadorial duties.

Dunbar resident Therese Wong had never heard of Qu. “But it’s a good idea,” she said. “Chinese people would know her, especially the younger generation.” 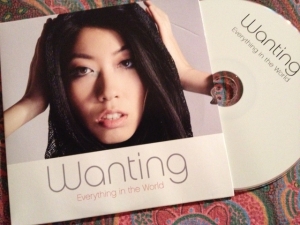 A group of St. George’s high school students said they did not know Qu, but an Asian-Canadian youth recognized track number 12 on the cover (You exist in my song), and said it’s a huge hit in China.

That will be music to the ears of Vancouver mayor Gregor Robertson, who is proud to have a superstar PR’ing the city. “Wanting is representative of the incredibly talented overseas Chinese who are part of Vancouver,” Robertson said in a press statement. “I extend my thanks to Wanting for sharing her enthusiasm for Vancouver in China.”

Watch the entire version of Frank Qi’s interview with Stephen Pearce and Wanting Qu on Global Mandarin (in English).